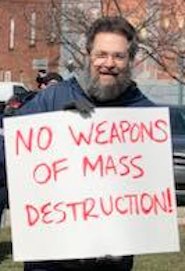 Today on my Facebook page, when I talked about going to the local rally in solidarity with the kids who had organized the March for Our Lives in DC, a friend of a friend said this to me:

“Owning a gun or buying a gun when adjudicated mentally unstable is also already a law, and I have relatives who have been shot or murdered and not once did we blame the weapon but rather the person using the weapon. The weapon, the car, the phone, the drug are neither good or bad but dependent on how the person wields it and what the person intends it for. If you want to make the inanimate object (gun) with no will of its own the evil object and worthy of banning, restriction, etc, then that same logic can apply to every object causing death or injury… thus the equivalent logic of banning/restricting phones, cars, knives, alcohol which all kill more annually than guns.”

I tried to point out to her, but she refused to see the difference, that semi-automatic weapons have the singular ability to kill people by the dozens within minutes.

It is not only a matter of intent or how the person wields the device that causes the death.

She was stuck on the fact that cell phones are responsible for the deaths of thousands of young people every year. (This argument seems to be a popular Conservative trope.)

It is true that the Centers for Disease Control report that in the US an average of nine people a day lose their lives as a result of distracted driving, and that much distracted driving happens because of cell phone use. (The total traffic deaths versus firearm deaths were almost exactly equal in 2015.) But the cell phones don’t kill those people; vehicle wrecks kill those people.

And let us consider DWI laws: All 50 states have them; four states (Colorado, Indiana, Kentucky, and New Hampshire) have no state laws regulating possession of firearms by people with mental illness. In those states that do restrict gun ownership by “adjudicated mentally unstable people,” there are often plenty of work-arounds. Lots of “mentally unstable” people are able to buy guns, especially since restrictions have been relaxed.

We have assault and battery statutes all over our law-books. Where do you get the idea that attacking people with fists and knives isn’t legislated against?

The point is that gun laws have not caught up to the laws regarding manual weapons and cars and cell phones and drugs.

I told the woman that I can’t help the fact that no one in her family blamed the weapons for the deaths. It’s a lot harder to murder someone without a gun than with one. Why would you pretend that gun possession had nothing to do with the murder?

Schoolkids get told that the three strategies for dealing with shooters are “hide, run, and fight,” in that order. I asked my stepdaughter how a student goes about fighting a shooter. She suggested throwing a book or binder at them. The problem I see with that is that you can kill someone from a great distance with a gun a lot more easily than you can disable a shooter with a projectile filled with paper. I see the point of fighting–it’s certainly better than nothing if death is imminent–but a book hurled willy-nilly from across a chaotic classroom is a pretty pathetic match for a repeating firearm… with a sight on it.

Of course people kill people… sometimes. (Natural disasters often kill more people than people do.) But when people kill people with guns, it was always the gun that did it. It’s a magnificent shortcut when you have mayhem on your mind.