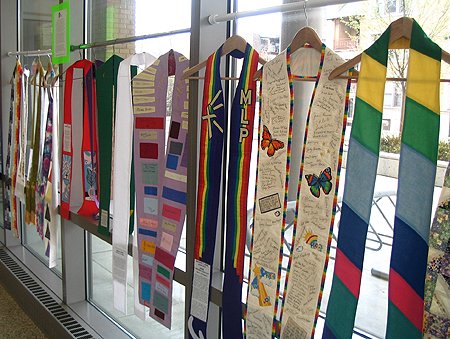 Many of you are familiar enough with my penchant for confrontation to understand that I was quite a presence at my ecumenical Protestant theological school, at which I regularly introduced myself in new classes as a post-Christian Pantheist Pagan UU and explained briefly what that meant. I was just trying to “locate myself,” as they say in such circles, so that people would know a bit of what to expect and what not to expect of me… though it rarely resulted in clarity since I invariably quoted more of the Bible in my classes than all the rest of the Protestants put together, even, in one case, intimidating a prof…

Last year the school hosted the Shower of Stoles Project, a names-quilt type of display featuring the clerical stoles of anywhere up to 800 people whose professional ministries have been compromised or ended because of anti-GLBT practices or doctrines. It’s quite stunning, and Martha, the maintainer of the project, is a delight to work with. (They have a web site at WelcomingResources.org).

As chair of the BGLQT group and a member of the Worship Task Force, I was the coordinator of that Wednesday’s chapel service, oriented around the stoles. As you may imagine, it was music-intensive, and it wove a thread that began somberly and ended triumphantly. For the processional, I sang, a capella, English verses to “We Are Marching in the Light of God (Siyahamba),” employing words like serving, waiting, and weeping as participants marched slowly up the aisles to place stoles on the empty stage/altar chairs. Then the choir and some extra singers did Ysaye Maria Barnwell’s “Would You Harbor Me?”

At the place where Protestants usually have a Psalm reading, I sang a Psalm-song that I wrote many years ago, during my fundamentalist days, and have since adapted for ecumenical use:

(Since I am a Pagan and draw on Wicca for some elements of my worship, I studiously avoided the word “wicked.”)

Here’s my point: Even though everybody there knows that this song doesn’t express a religious tradition or a theology that I hold to (I sang it because most of them did), the entire congregation listened in rapt attention. I was floored.

The service went spectacularly well–we ended with “We Are Marching” at its regular rhythm, with drums and maybe even dancing in the aisles. That song always gets people’s blood circulating.

When I discussed my surprise at the reception of Psalm 1 with my advisor, Tom Troeger (author of “Praise the Source of Faith and Learning” in SLT), he told me that a lot of people at Iliff were actually a lot more intimidated than I realized about the fact that I was always stating my alternative theology, but that when I open my mouth to sing, I get in under their defenses and grab them at a level at which they can’t resist, and I get them eating out of my hand, as I did that day. Tom later co-taught my preaching class and helped me to find ways to use the same principle.

So on my best days, I remember that if I’m going to open my mouth in a potentially charged situation, I do well to have a song come out of it first.