Yes, actually, I AM a Girlyman

Buck, our Honda Element, wouldn’t start one day last week so I rolled up my sleeves, grabbed a few tools, and got my hands greasy. A few minutes later he was purring in the drive, so I came in, put things away, washed my hands, and touched up my eye liner.

See what I did there? Blurred those boundaries. I worked on the car, which was a brawny thing to do, and then fixed my face, which is a typically feminal thing to do. Which incidentally, I’ve been doing all my life, but I’m just now getting comfortable with the fact that I am all over the place when it comes to masculinity and femininity.

When I was a little kid playing with my older sister, we played mostly girly things like house and Barbies and made paper dolls, which all suited me just fine. My mom taught me to cook and sew. I enjoyed those things. I also had Hot Wheels and GI Joes and a big sand pile. I had the luxury of access to my dad’s work bench and tools, where I would build and deconstruct things to my heart’s content, and I eventually learned to maintain my own minibike. And I enjoyed those things.

I had a girl cousin playmate the same age who was determined to be Johnny West instead of Jane and she was humored as a tomboy. And conversely, nobody in my habitual life seemed to bat an eye at my tendencies. When it came to make believe, I generally pretended to be female, which just felt more natural. As a matter of fact, whenever we pretended with cousins or neighbor kids to be cowboys or heroes or TV characters, none of my familiar peers ever took any more pause at my choice to be Victoria Barkley or Becky Thatcher or Batgirl, than at Jane’s inclination to be Little Joe, Tom Sawyer, or Batman. It wasn’t until I started public school that it became apparent that exhibiting traditionally feminine characteristics would get me at least teased and at most beaten up, and I learned to hide those tendencies from acquaintances and strangers. It was pretty confusing. The safe acceptance I had at home conflicted with the torment I received from others and I was embarrassed to admit it to anyone. It made me not only feel different and wrong, but also to view my loved ones as suspect. So along with the fear, all kinds of doubt and shame took hold. Bullying is torture, but that’s a story for another day.

So there were decades of me trying to be manly enough to appear to be not too much of a sissy. And for what, really? Did it matter that I didn’t care for sports or get excited about cars? And what kind of measure was I trying to meet? And where does that even come from? It says in the Bible that God created male and female, but then there’s no divine list of criteria for masculinity and femininity. When I decided to daringly pierce an ear back in 1982 there were lots of objections, which I countered with Exodus 32:2. Not even the bible said men couldn’t pierce their ears. And in raising my own kids I became much more aware of how those roles are just social constructs of the here and now. Rules of masculine and feminine behavior are determined by those around us who pressure us to fit a norm that makes them comfortable and reinforces their sense of security. What a crock! Besides for the shame that was aimed at me, I became furious at the ridicule that was aimed at my mom for not shaming me herself. And I count myself blessed to have had my sister who allowed me to have just the best childhood without any condemnation ever. Well, at least not for being too much of a sissy — she was pretty rough on me for being purchased from gypsies by our parents.

So along with creeping out of the closet beginning in about 2010, I began the journey to reclaim the  parts of myself that I had striven to bury deeply, but I was traveling with no road map. One of the most revelatory meetings occurred with a new cast member in my theatre company. Roman is a beautifully faceted creature of traditionally masculine and feminine traits, and he presents it all as just entirely Roman. When I first met him I was aware he acted as well as performed drag, so I expected the femme. I came to learn he is the most compassionate caregiver, with a history as a trucker, and just about as capable a mechanic as I know. He may wear different hats, but never a mask. He never hides or apologizes for any aspect of his identity. I am so grateful for his example, but the lessons were so hard to absorb.

Besides dealing with trauma and PTSD, repairing my confidence and self-esteem was a major focus when my family doctors recommended a therapist several years ago. He felt reclaiming the traits I had learned to be ashamed of was pivotal in my recovery toward authenticity. A precept he taught me was, “What anyone else thinks of you is none of your business.” I’ve struggled to stop second-guessing how my brain insists others will judge me; if it’s harmless, I strive to follow my instincts.

When I met my huzzband Khrysso, I was really taken by his ease at social ambisexuality, as well. He generally wears a lot of plain dark colors, but on one of our first dates he wore a pale green tee shirt with a big bouquet of pansies on the front. He loves green and he likes claiming the power of the symbolic pansies for his own. And it reminds me of something my mother would have worn. He is completely unself-conscious in it. He is not overtly masculine or feminine, he just is. And he encourages me to relax and put back on those parts I tried so hard to discard for so long. And we’re entertained by how the masculine and feminine traits in each of us provide balance in our relationship. 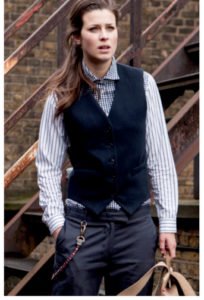 With the rise of feminism in our generations, it’s so common for women to be more complete these days. They are the nurturers who have learned to be strong, shattering preconceived gender roles. Men have been slow to follow. Thank God I see in the younger folks a growing general healthy disregard for rigid gender identity. What can it possibly matter if a man wears nail polish if he’s busy being his best self? The only ones who care are the ones whose fragile identities are defined by such rules. The world’s better when you let go of silly, small legalities. When people feel free and safe to express themselves in creative harmless ways, they are more confident to share ideas and exchange information. 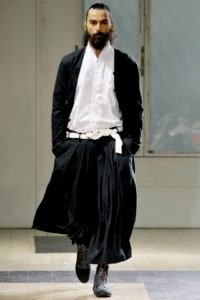 Imagine if all children were raised never to hear the strictures, “That’s a boy color. That’s a girl toy. That’s a man’s job. That’s a woman’s place,” and instead only heard, “That’s kindness. That’s creativity. That’s strength. That’s ability.” Bridges, instead of divides. Just like the Great Artist, mother and father, encompassing all the best faces of love.