The Weight of Disbelief 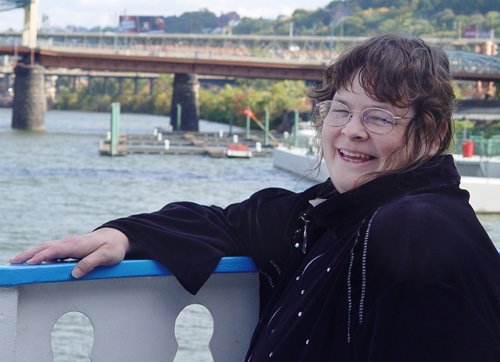 It’s been a year since my very best friend — and the light during most of my life — died. I still can’t quite wrap my head around that. I definitely can’t wrap my heart around that. Sheri Roberts Tennant was my counterpart in so many ways: we really got along like Will and Grace in most respects, down to being a nearly undefeatable team in board games because we knew and could read each other so well.

One of the most over-whelming aspects of losing Sheri for me was the practically crushing weight of being the sole witness of all the memories we lived together in the course of our 40 years. The secrets she confided, the things she believed, the dreams she dreamed, as well as each countless moment we spent together alone. I said many times of my relationship with Sheri: it was many things, but it was never, ever dull.

For the most part, I think it’s a crime that nobody else will know these things, that so many facets of who she was will fade away with me. The Sheri I’ve known was a spectacular personality. I thought it was a shame that so many of those who knew who her for so long, who professed to know her best, never really saw it. She was never the type to be obstreperous, but when someone invited her to shine, she would blow their socks off.

There are a million and more secret moments in the life we shared, especially the 18 years we were married before our daughters came along. At first I thought I would be crushed at no longer having an other to share all those with. And now after a year since she left, I can say I mostly feel privileged for the honor of having witnessed and participated in them. And I feel blessed that we were so many things to each other in our four decades as our relationship coalesced and transformed: allies, parents, lovers, siblings, caregivers, comrades, and always, always, best friends. Most often we were trying to figure out who we were supposed to be, and there were wonderful moments when we stopped trying to figure it out, and just were.

She adored champagne but giggled over fuzzy navels. Her favorite art medium was mosaic. She always wanted to be an archaeologist. And now the thing that I feel

threatened by is the continual weight of how much I miss her, the grief that cohabitates with my joy. There were many times in our history when we did not live together, but we never stopped being. And now I have to remind myself that we still are. I have an angel (Saint Sheri Hubert, for those who know more of her story). Because Sheri’s love was always final. Our life was not without turbulence and certainly not without pain, but always with love. In her last appointment with her counselor the week she died, Sheri told her I was a good man, she wanted me to know that she wanted me to be happy, and she loved me always. I know she’s happy. That’s what matters.

Grey Forge LeFey
Blowing my face off
And here we abide: CALIFORNIA!

2 thoughts on “The Weight of Disbelief”